On the cusp of his 90th birthday, Leonard Melander passionately pursues a lifelong love affair with bridge, that sophisticated and complex grande dame of card games.

In 2007, at 82, Melander became the oldest player to win a U.S. national duplicate bridge championship; he did it again in the senior division four years later. The game remains a rewarding, if sometimes vexing, pursuit for the retired physician from West Bloomfield, Mich.

“It is the intellectual challenge, the problem-solving satisfaction” that makes bridge so attractive, said Melander, 89, who finished runner-up in the Super Senior Pairs at the Fall North American Championships last December in Providence, R.I. “Let’s put it this way: Any activity from which you derive pleasure prevents the onset of classic depression.”

“Bridge,” added Melander with an audible sigh, “is the equivalent of a narcotic high.” 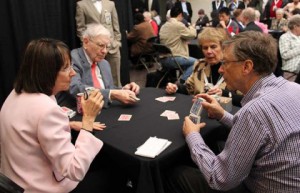 The game has a similar allure for an estimated 25 million players in the U.S., including such fanatics as Warren Buffett and Bill Gates. The majority of them are over 50. Researchers have discovered that mentally challenging games such as bridge are well suited for older people because the games offer intellectual and social stimulation on a routine basis.

Bridge’s intricacies make it particularly appealing for those who want to sharpen acuity with mental gymnastics. A study in 2000 at the University of California, Berkeley, found strong evidence that an area in the brain used in playing bridge stimulates the immune system. Researchers suggest that is because players must use memory, visualization and sequencing.

“When I first started playing in my late teens, I could not remember the cards played,” said Burt Saxon, 67, a retired teacher from Milford, Conn. “By my 50s, I pretty much recalled every card. Now that I am older, I have to work at it. I believe bridge helps prevent my short-term memory from completely declining.”

Keith A. Josephs, a neurologist at the Mayo Clinic in Rochester, Minn., said, “It is soft data that says, ‘Boy, perhaps playing these games and being socially active result in better performance.’ Patients are less likely to be depressed; hence they sleep better, tend to exercise more and have a better life in general. They do better from a cognitive standpoint.”

Josephs stressed there is scant medical evidence that “playing any of these games is going to prevent a degenerative process or the onset of Alzheimer’s. Rather, it might delay the onset of symptoms so that the individual can function at a higher level,” he said.

Heather Snyder, director of medical and scientific operations at the Alzheimer’s Association, said one thing that is lacking in Alzheimer’s disease research “is the recipe of what is going to reduce someone’s risk or delay the onset.”

Last year, the Alzheimer’s Association shared the results of a large-scale clinical trial in Finland that demonstrated the benefits of combining cognitive training and social activity — two of bridge’s chief benefits — with other lifestyle elements: that multiple changes in lifestyle can improve memory and thinking in those at risk for cognitive decline.

A 2014 study by the University of Wisconsin-Madison found that playing card and board games can help older people retain their mental sharpness. Researchers discovered that the frequency of playing games is associated with greater brain volume in several regions that are affected by Alzheimer’s disease. Those who played more frequently also scored higher on cognitive tests. 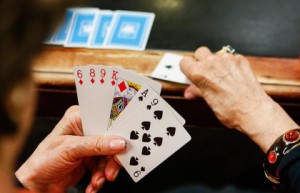 In Melander’s case, playing bridge into his golden years appears to have benefited his overall well-being. Through bridge, he keeps socially engaged and cognitively challenged. Of course, he did not have to be concerned about such things when he was a teenager, a time when bridge trumped most leisure activities in America.

“In the ‘30s, everybody played — badly, but they played,” Melander said with a laugh. “Bridge was front-page news. During the Depression, no one had anything to do but play bridge.”

A chief reason is the game’s rich social component. For decades, friends and family frequently gathered over cocktails, dinner and a spirited game of bridge, which was derived from the 17th-century English card game of whist.

Contract bridge, played by four people and developed during the 1920s, requires players to bid how many cards or “tricks” they believe they can take on a deal. Duplicate bridge is the most popular and competitive variation of the game. It reduces the element of luck because identical deals are replayed by multiple sets of players, who compare scores.

Bridge diminished in popularity from its halcyon days in the 1930s and 1940s. In the early ‘60s, there was a nationally televised program for bridge followers, but by then sweeping changes in social and leisure habits began fueling the game’s decline. Today poker is all the rage; bridge, to young people, is a vestige of a bygone era. The average age of today’s competitive U.S. bridge player is 71.

While bridge was long ago reduced to niche status, the New York Times still publishes a bridge column. The game received a boost when it was granted exhibition status at the 2002 Winter Olympics in Salt Lake City. Bridge loyalists refuse to throw in the cards on the distinguished game. It is still played by millions — socially in homes and clubs, and competitively in tournaments. In recent years it has reached a wider audience online. Lily Hansen, 103, of Ludington, Mich., has played bridge for nine decades. “I am the only silver life master in my town,” which means she has accumulated 1,000 lifetime masterpoints from the American Contract Bridge League (ACBL). “To become a gold life master, you need 2,500. In my case, I don’t think I will be around that long.”

Hansen plays bridge twice a week and is director of a duplicate bridge club, which keeps her math skills sharp. “Everybody asks how come I am 103 and still driving … still around,” she said. “Duplicate is competitive. It keeps your brain working. I honestly believe that.”

In recent years, the ACBL launched a number of marketing initiatives to lure more boomers, many of whom played the game as youths.

“We’ve found we can re-attract people in their 50s” through educational and instructional programs, said Robert Hartman, CEO of the ACBL.

The ACBL’s primary audience consists of college graduates ages 55 to 75 with annual household incomes in excess of $75,000. Some boomers are new to the game, but many, such as Bobby Levin, 2014 ACBL player of the year, learned to play as children. Levin started playing at 12. By 15, he was a life master, the highest designation for a bridge player at that time.

“My mother taught me after she was divorced — [playing] was a nice way for her to meet people,” said Levin, 57, who is a full-time bridge professional. The best pros earn more than a half-million dollars a year. 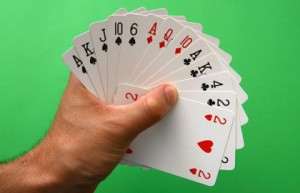 Bridge offers big benefits, regardless of age, income or physical condition. It is challenging, inexpensive and can accommodate those with serious disabilities, such as blindness.

“For a lot of people older than myself, and less capable physically, it is the only outside activity they have,” said Paul Kelley, 74, a retired electrical engineer from Plymouth, Mass. “It really does good things for seniors in keeping you mentally sharp, particularly with degradation of memory.”

Each deal has billions of possibilities. George Jacobs, 65, a columnist for the Bridge Bulletin, said, “Every hand is like a snowflake.”

“The best players make so many errors in a session that, if they were baseball players, they would be fired,” said Jacobs, who was captain of the 2002 U.S. Olympic exhibition team. “You keep trying, so your brain has to function harder.”

Two of the smartest fellows in America, if not the most accomplished bridge players, are Warren Buffett, 84, and Bill Gates, 59. Buffett once said that he wouldn’t mind going to jail — if he had three cell mates who were capable bridge players.

“Warren has been playing for almost 70 years,” said two-time world champion Sharon Osberg, 65, a friend and regular bridge partner of the billionaire. He “learned during a time when there wasn’t a lot else going on and everyone was playing bridge. The Internet really has opened it up for him. He doesn’t need to collect four people in Omaha to play. Bill played with his parents and took a long break until he met Warren, who got Bill re-interested in the game.”

“Generally speaking, chess and bridge suffer the same fate — there is too much competition for young people’s spare time,” she added. “Bridge is a hard game. It requires a large time investment. The more you know, the more you understand what you really don’t understand.”

Such is the game’s timeless, elegant and slow-paced appeal, which Marcia Tompkins, 74, rediscovered four years ago.

“Bridge is something I can do now,” said the retired bank auditor from Surry, Maine. “You can play bridge as long as you are in your right mind.”

Getting started Regardless of a beginning bridge player’s age, education or physical condition, tools are available to help learn the game.

“There’s no doubt anyone can learn,” said Robert Hartman, CEO of the American Contract Bridge League. “We have a number of programs developed to make it simple.”

In recent years, the ACBL has increased the scope of its programs through technology and the Internet. Chief among them:

“It flips the whole concept that it takes years to learn bridge,” Hartman said of the course, offered at the North American Bridge Championships and various locations. “Essentially, we teach the basics in a day.”

Retirement communities and local bridge groups welcome new players. For those who want to learn how to play in person, acbl.org/findateacher is a good resource. Other useful websites include bridgedoctor.com, learn.acbl.org and abtahome.com, which is the home of the American Bridge Teachers’ Association.

“You can feel comfortable and aspirational no matter who you are,” said bridge fanatic Steve Emerson, M.D., 61, head of the Herbert Irving Comprehensive Cancer Center at New York-Presbyterian Hospital/Columbia University Medical Center.