Cedric Lorenzini amassed 690 platinum points to win the 2015 Player of the Year title. Eric Greco finished about 10 points off the pace to come in second. Platinum points are available only in national-rated events at NABCs.

Lorenzini won the Norman Kay Platinum Pairs at the Spring NABC and the von Zedtwitz Life Master Pairs at the Chicago NABC. He also notched top-10 finishes in the Vanderbilt KO and the Reisinger BAM.

The 26-year-old Lorenzini, who lives outside Paris, France, is the first non-U.S. resident to win Player of the Year honors. He is also the youngest.

Look for a feature story about Lorenzini in the February Bridge Bulletin. 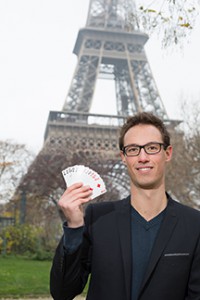 photo by Guillaume Perrin, courtesy of the French Bridge Federation.