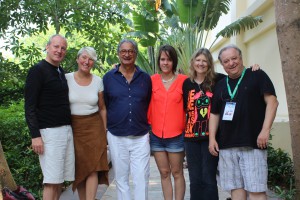 The contest was open, allowing for transnational teams, and the Salvo squad is an extreme example. Zorlu is from Turkey; Mahmood lives in New York City and London but is originally from Pakistan; Michielsen is Dutch; Auken is from Denmark and Welland is from the U.S. The Auken–Welland partnership is playing for the German federation, however, in this year’s world championships. Salvo defeated Geely Automobile, an all-Chinese team, 103–90 in the final.