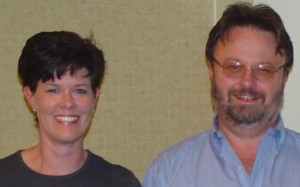 Chris Compton began playing bridge professionally at age 17. He is a World Grand Master and a Grand Life
Master with over 31,000 masterpoints and won the Barry Crane Top 500 race in 2011. Donna is the reigning World Mixed Champion and a WBF World Life Master, who began playing competitive bridge in 1975 with successes at the national and international level. Donna was awarded the Journalist Award for the 2005 Defensive Hand of the Year and awarded the rank of Master Teacher by the ABTA in 2007. Donna and Chris have been married for 23 plus years.